It's early - and by early, I mean late for me. I partook of the turkey, of the dressing, of the sweet potatoes, corn pudding, and rolls and I fell into a deep slumber far earlier than I should have, awoke in the middle of the night and then was like 'Aw, nuts'.  One thing followed another and now it's 10 in the morning (very late for me) and I'm getting the post up.

So right now I'm very much in a 'How Human Use Word???' mode. So this intro will be brief. Today we're looking at Deconstructing Eden's addition to the A Winter's Ball set - Truth Universally Acknowledged. Which is kinda special to me because well... I was all like 'omg I hope at least one perfume is called that' and Toni had my back.

This review ended up being kind of special because it introduced me to a new perfumery family: fougere. As far as I know this is my first time smelling a fougere! Fancy.

To cover the bases: This perfume was rested somewhere between three days and a week (closer to five days but not a hundred percent sure). The packaging on this particular lil sample was so hot off the presses that it lacked a label! The big version of this that comes in the box does come complete with label however. (Here is where I spent far too long wondering if a winky-face emoji would be too disruptive to my writing style).

Since this is an EDP (and sealed in a bottle I can't figure out how to get open) I eliminated the bottle sniff section and combined the wet/drydown section... EDPs tend to dry super fast! 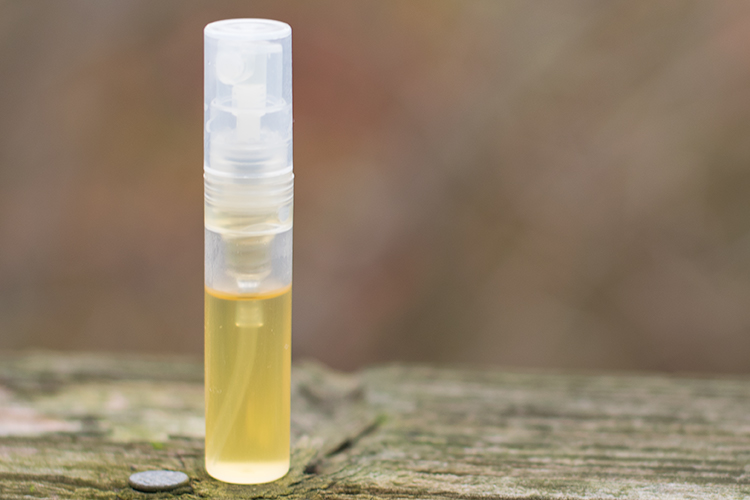 Wet on my skin/Drydown:  Musk and rich wood.  Sweet, arched with dark browns and golds with a kind of sharp floral edge to it.

So at the top I’m getting a bit of a piquant/sharp floral combined with a spice (cinnamon maybe?) coupled with another floral (kind of reminds me of a rose or even a lotus).  Under that is sweet musk (like a sweet-clove musk or a sugar-musk even) in the middle and below that rich woods with a bit of a citrus bite to them (reminds me of freshly cleaned wood).

After 30 mins: Rose at the top. Smooth and soft now - no sharp edges.  Under that I get a sweet musk (that kind of reminds me of clove), wood of some sort, and a touch of sweet amber. Maybe a tiny citrus bite in there (or something a little bitter) to balance out the sweet.

I do want to note for those with certain preferences:  The sweetness in this keeps verging right on the edge of bubblegummy for me - I think it’s the particular kind of sweet and musk in this. On some sniffs it’ll be like ‘oh that’s rich and musky and dark red’ and on others it’ll be ‘that’s kind of bubblegum’. There’s also like a tiny, tiny bit of powderiness to the scent.

Wears pretty close to the skin - strong scent cloud starts an inch or two away.

Official Notes: Rosewood and mahogany bookshelves, Russian leather chairs, a simple eau de cologne of English lavender, Bergamot, and fougere accord, a glass of cognac, a river of scotch, and tobacco absolute.

Interesting! So let’s break this down:

The rose is the rosewood - I’d say is smells more like the flower than the wood to me. The sharp floral at the start I’d bet good money is the lavender. The leather is a tiny touch in there blending with some of the later scent.

I’m going to bet the ‘sweet musk’ and ‘spice’ notes I was getting are the fougere and cognac - and I’d bet it was the cognac that sometimes went a little ‘bubblegum’ to my nose. Because I’m still learning a lot about perfumery I had to google what fougere is - and I’m guessing ‘sweet, musky, spiced, powdery - like a clove musk’ is my nose’s best attempt at describing that scent without knowing what it was! The scotch is what I bet I was interpreting as an amber, and the mahogany is the smooth wood/resin at the base.

Oh, and the bergamot is that nip of bitter citrus I was getting. I’m not sure how the tobacco absolute fits in - maybe it’s adding some of the sweetness?

It’s a pretty gender neutral scent - wasn’t sure where else in the review to note that, but, in my book that’s often a plus.

Verdict: Torn! I need to spend some more time with this one. This one excited me when I put it on, and when I got a non-bubblegum sniff. I was less excited about the bubblegum-sniffs. As the scent wears longer though some of the bitter undertones are coming out to balance out that sweetness. As it stands this scent is either a ‘keep my sample but don’t upsize’ or a ‘eventually upsize after spending some time with it’.

You can get this scent as part of the A Winter's Ball set found [ here ]! The set is on the pricey side (it's a luxury box!). However! Sucreabeille is also running a sale right now (11/29/19) and this would push you up into some of the higher tiers all on its own... so you'd get a box of lovelies and a bunch of other swag along with it.

Posted by Aubin "Clawsight" Richards at 6:56 AM