A Winter's Ball Day 5 + 6: The Marble Gallery At Pemberly from B. Perry Studios and The Gentlemen of Derbyshire from Libertine Bath Haus

How ironic is it that I ended up having to combine two days of this because in laws came into town and I had to entertain them? These kinds of social encounters look different on the surface from Regency ones but:


ANYWAY, here we are talking about soap and hair oil! The Marble Gallery At Pemberly is the soap, The Gentlemen of Derbyshire is the hair oil. In terms of Regency style experiences: Our modest house lacks a marble gallery, but, we do have a variety of neat statues (including a museum quality replica of a whale vertebra). I've also never been to Derbyshire. I assume they know how to party.

To cover what needs to be covered: The soap was rested in a drawer in my bathroom for like, a week. The hair oil was rested 24 hours. In terms of packaging: neither came in the packaging they'd be in in the box - the soap was shrinkwraped in plastic (which protected it tell) and the hair oil was in a vial instead of in the large dropper bottle. 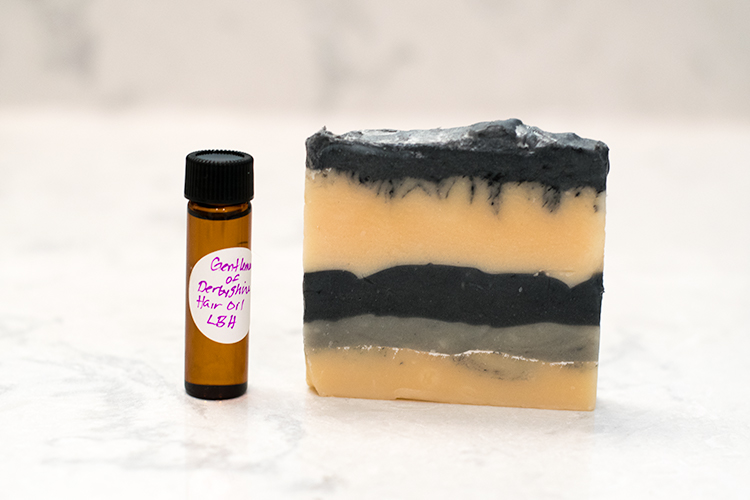 The Marble Gallery at Pemberly (Soap)

Texture/Appearance: The soap is a really lovely layered soap with a bit of shimmer tucked inbetween two of the layers near the bottom. When it’s dry to the touch it’s deceptively soft - I say deceptively because the last B. Perry soap I tried I was like ‘wow, soft, almost like clay’ and I thought it would melt super fast. It didn’t - still going strong (admittedly I only use it as a facial soap).

This one is a touch firmer than that - reminds me more of a firm wax in texture than a clay. When wet the soap takes on a thick, almost sticky sud-coating to it. Very luxuriant feeling to the touch.
One thing I will note about this soap - it’s only major “negative” point (which is in heavy quotes because it’s  ultimately so minor) is this soap is a little messy! The black in it is a charcoal or something and when the soap bar gets laid down (it’s a little too narrow to stand on end) it leaves black soap-residue. For those of us in The Order Of The White Bathtub you might want to set this on to of a washcloth or soap dish.

Performance: When lathered just using my hands it made a syrupy almost gel-like lather that felt super luxuriant going on the skin.  This would probably make an excellent shaving soap when used straight on the skin, or on hands. When applied to my shower pouf it formed a super, super fluffy thick lather that felt great going on. It left my skin feeling very clean and seemed to have a very slight exfoliating effect even though there was no rough texture.

Official Notes/Scent Analysis: Cold stone - petrichor, and earth -  at the heart of a bright dance with lemon, pomegranate, verbena, and apple.

The dominant notes in this soap are the petrichor and earth followed by the lemon and verbena. The soap is kind of a contrast - on the one hand it’s super, super earthy (but, I want to emphasize not mulchy or green or hothouse) but the brighter notes also give it a firm ‘clean’ vibe.

I’d say at the top you get the realistic earth and petrichor followed by the cold stone with, as mentioned, the earth/petrichor dominating. Then you’re hit with the lemon and verbena - the lemon smells ‘clean’ but not ‘floor cleaner’ and the verbena gives the soap an almost medicinal tang. The pomegranate is subtle and blends with the earthier tones and the lemon and gives the scent some needed sweetness to take the edge off of the more bitter earthy notes. I didn’t really get the apple - I suppose I could see a kind of apple-peel sort of apple bridging the brighter notes and the earthy ones.

Verdict: Torn. I really liked how this soap performed. In my last review of a B. Perry soap I was on the fence about the cost - in part because I was worried I’d go through a bar of their soap quickly. With how long that bar has lasted me however (again, admittedly only as a facial soap) I’d be fine buying more B. Perry soaps at their current price point just to keep one on hand for facial washing.
What I’m torn on this time is the scent. It’s very earthy. Fresh, cool dirt and stone. It smells like a winter’s day up on the Appalachian trail if you were up there surrounded by lemongrass, pomegranates, and apple skins. It’s kind of nostalgic to me in that respect. However - I’m not the biggest fan of heavily earthy scents as a class. So, I don’t know how I feel about this one on a personal level. Will I use up my bar? For sure. Will I repurchase this particular scent? No clue.

The Gentlemen of Derbyshire (Hair Oil)
So for the methods I this one: I took a bath and then after the bath I towel dried my hair (I know, I know. It’s short! I can get away with it! It avoids heat damage!) and applied what was probably ultimately a dime sized amount of the oil (I basically used my little vial to apply some to my finger tips, rubbed my finger tips together to warm it, applied it, and then applied more until I had what felt like good coverage).  This is how I’m determining performance.

For the scent analysis I just applied a small amount to the back of my hand and let it sit for half an hour. I considered just reviewing it like a perfume - but ultimately I expect hair products to be more mildly scented so they can be layered with other scents. (also with the thicker oil it would take longer to sink in than an oil based perfume). So I decided to apply it then wait half an hour for the scent to stabilize.

Texture: Oil is thicker than a perfume oil - but surprisingly not terribly greasy on the fingers. A smooth oil. I think I may have applied too much in thinking I didn’t have enough because the texture is relatively light compared to other hair oils I’ve tried.

Performance: As mentioned above I believe I applied too much. It wears very light on the hair with a non-greasy texture… but with the amount I applied I did get some hair clumping that looked kind of greasy. I think that’s user error though.

I found it left my hair shiny, soft, and as mentioned no greasy texture.  It held moisture into the bleached (like, platinum blond bleached) chunk of my hair. The scent on it was mild and unobtrusive - though I did get small whiffs of it and can smell it on my hands after running them through my hair.

The oakwood dominates. I honestly thought this had a whiskey note until I saw the official notes. It smells a lot like scotch to me, edged with the tobacco leaf and leather.  The clove rounds it out - it almost smells salty. Overall the scent is earthy, very reminiscent of scotch whiskey (though, not boozy) and full of warm, rich, slightly sharp masculine notes. Perfect fit for smelling like a bit of Regency era debauchery.

Verdict: Love this as a styling product!  How light it wears is a big plus for me - I’ll just have to apply it more conservatively in the future. I can totally see picking up some of LBH’s hair oil based on my experience with this.

This is currently the only scent their hair oil is available in! I like the hair oil quite a bit, and I like the scent well enough (it’s earthy-masculine-oaky which is fine with me, but, not my absolute favorite scent ever from LBH) that I’ll be full sizing this from LBH… but I’d love to see it available in multiple scents!

You can get this scent as part of the A Winter's Ball set found [ here ]!

You can also get the hair oil [ here ] by itself.