I left the balcony where I had tried my first pair of scents in a contemplative mood.  This experiment, this gentlefolk’s challenge, was going to be more of a thought exercise than I had expected. Experiencing two versions, a mirrored vision of a concept, through scent was a deeply evocative way to understand someone’s experiences. There is a frightening amount of artistry involved in creating a truly awful scent.

The map guiding me to my next destination had me follow a curious series of left turns. Logically, I ought to have been going in circles but each room was different: an indoor garden resembling a forest; a library with a small model ship floating in a miniature wave pool in the center; an empty theater where at the edge of my hearing I could perceive a soft, tinkling laughter; a room that appeared entirely like the interior of a barn - complete with windows on either side that appeared to gaze into an idyllic countryside; a long, dark hallway lined with sideboards set with wineglasses filled to varying degrees with clear water.

I tried to make sense of the arrangement of the rooms on the map - but the map seemed to shift, slide, and swim beneath my gaze.

Eventually I came upon a room that was inhabited. It was a smoking room, soft with the scent of aged tobacco. Leaning over a billiards table, measuring her shot, was Jenn of Libertine Bath Haus. She wore a tweed blazer over a white blouse, with a slim black tie, and dark high waisted trousers. Her long hair swept wildly around her face and her fingers glittered with jewels.

“You finally made it,” she said. Her cue hit one of the balls with a satisfying ‘thock’ sound.

“Did the ghost in the theater hold you up at all?” she asked.

“There’s a ghost in the theater?” I asked, recalling the laughter.

“Oh yes, it’s quite haunted. We’re not sure who she's the ghost is of - but she is known to lead visitors on merry chases. Sometimes they get lost for weeks. I’m really beginning to feel it's a bit of an inconvenience.”

“Anyway,” she said straightening, smiling and clasping her hands together “You’re here for the scents! I have two odors here representing a Saturday morning. My ‘toast’ is a Saturday morning in a fine, upscale coffee shop where you’ve slipped a bit of hair of the dog into your morning brew.”

“My roast is a very similar scent, but with added elements of ‘a searing headache’, ‘cereal drenched in sugar’, and ‘screaming children’.”

Below, my fine readers, are my notes on these two scents... 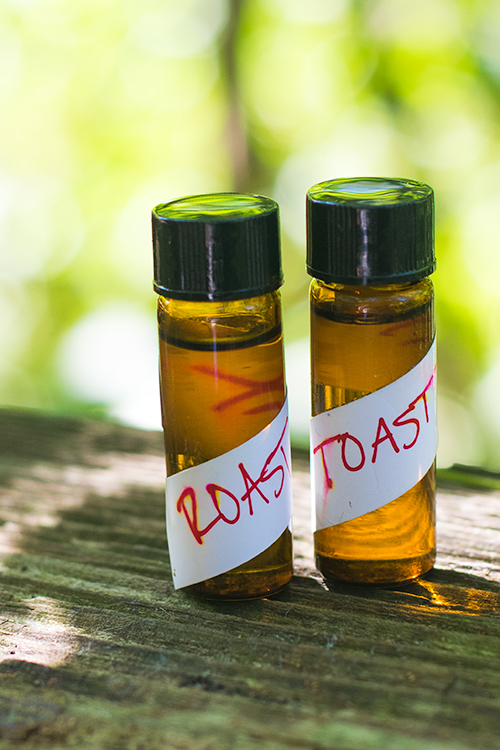 In the bottle: Just as an FYI I am trying this one in oil form - but from LBH It’ll be available in body spray form. They apparently will smell identical once dried down, but I’m not sure how well the bottle-smells will match up. I’m including this section for science.
Ultra rich, smooth, dark roasted coffee with a splash of gourmand-toffee scent and an undercurrent of dark leather (a note I recall from the official notes) and woody booze (the scent’s name says ‘bourbon’ so I suspect this is bourbon.)

Wet on my skin: Candied-toffee smoky vanilla, thick dark coffee, something that reminds me of sticky-tobacco (though, I distinctly recall the official notes not mentioning tobacco), dark leather and sweet-woody bourbon.
What’s interesting is something is blending in here to almost smell like dark, smooth cola. I really like it. It reminds me of an ultra fancy mixed drink from the rum-and-cola family served at a fancy bar that also serves coffee and cigars. All the upholstery is leather in this theoretical bar.
The scent lives in that exact border realm between masculine and feminine - it could be the scent of a gentleman who’s also a bit of a fop, or a hard-femme lady with short, swept back hair, tattoos, and a slinky black evening gown.

Drydown: Topnotes of a buttery, almost-toffee like scent. Not as strong as it was when it was wet. It’s backed by leather, vanilla, coffee and soft smoke. The coffee and leather blend together really softly in a way that smells well… like real leather. Like a leather jacket a barista works in.
Below that is a hint of sticky, rich tobacco smell. At the base is that thick woody-boozy scent. It’s very similar to how it was wet, but more blended and more smooth. The word ‘smooth’ and the word ‘rich’ are both keynotes for this scent. Perhaps ‘decadent’ ought to go in there too.
After 30 mins: Very stable to the drydown. Very solid throw on it too - even in oil form I was getting whiffs of this from  over a foot away from the application point.

Official Notes: Creamy smooth smoked vanilla, the remnants of last night’s bourbon, sandalwood, a soft leather chaise and freshly smoked espresso beans
Yup, get the vanilla, bourbon, leather and coffee. I will note there is something in here that’s a little medicinal/herbal that I was flagging as tobacco. I don’t know if there’s an unlisted note or if I’m just reading another note as that. With the sandalwood, if I sniff the scent enough I can get something a little smooth and resinous, and a touch earthy in there - but it doesn’t dominate the scent by any means.
Very rich, soft, decadent, smokey and buttery. I’d say this lives somewhere between gourmand and atmospheric. The coffee and leather blend together so, so well. It’s also worth mentioning that there is nothing acrid or ‘rough’ about this leather. Just silky smooth glossy leather.

Final Opinion: This one is so nostalgic for me in a way I can’t place. It smells a little like the leather sofa I have in my living room, but also like somewhere else I’ve been that I can’t put a name to. I love how it treads the line between masculine and feminine, I love how rich it is. I love how it’s got a definite ‘gourmand’ feeling to it without going extremely sweet.
Great for people looking for a more masculine gourmand or for people who like gourmands that are a little sweet and very rich without going heavily sugared. Reminds me in some hard to articulate way of Sixteen92’s Party at the Moon Tower. I think it’s the ratio of sweetness to atmospherics - as well as the overall way the scent is balanced with a tiny kick of earthiness at the end.

Saturday Morning Cartoons with a Hangover

In the bottle: The first thing that hits you is the cereal, which stands out like a sore thumb next to that decadent vanilla. It smells like Cap’n Crunch and Froot Loops had an unholy baby… because directly behind the cereal there’s a wave of just… acid. It reminds me of when you’re hung over and eating something and you throw up into your mouth a little bit
The artificial fruit smell lingers. Nothing in nature smells like this.This “fruit” note was concocted in a laboratory so that they can claim sugar soaked corn is a breakfast food. I’m sure the original food scientist proclaimed it ‘fruit adjacent’.
So. I just had a boo boo. A terrible boo boo. I set down my (closed) bottle of this scent without realizing I hadn’t closed it tight enough. There is now a spot on the duvet I set the bottle on that is drizzled with this perfume. Uh oh.
Behind the fruit and bile is something floral - like a… jasmine? Like a controversial jasmine that’s pleasant to some people and screechy to others. It keeps waffling between ‘screech - lemon highlighter ‘ and ‘hm, jasmine, nice’ to my now.
Under all of this are the buttery, dark, rich notes of the untainted version of the scent.

Wet on my skin:  There’s a moment - just a brief moment - where this smells kind of nice. Then everything - everything - that’s in the untainted version of the scent dies back except for the vanilla and I’m left with:


And I’m someone with skin that white florals treat nice. I tend to amp their sweeter tones - I’m positive on a certain chunk of the population this jasmine or whatever this is would not play nice. If it’s verging on screechy on me that means with a less white-floral friendly skin it would probably go all cat-piss-highlighter. As it stands it dances on the edge of cat-piss-highlighter for me.
I can see, like a sailor gazing on a distant shore, a pretty white floral that could include a version of these notes carefully tempered. They’re not being tempered here.
On the spot where it spilt some on the duvet it’s mostly just sugary artificially ‘frooty’ cereal which I am taking as a positive.

Drydown: Of all the R & T scents I’ve tried so far this is the one that ‘develops’ the most the more I wear it. In the drydown something metallic and skunky comes through. That’s when this perfume goes from being ‘Oh, weirdly unbalanced with some gross elements’ to ‘Oh, my God that is nasty’. This bears virtually no resemblance at this point to the toast scent.
This smells like you woke up after a long night of partying, went to go eat cereal through a throbbing headache, then proceeded to barf up the cereal with just a tiny hint of booze into a trashcan that a skunk’s been sleeping under.
Good news though: spot cleaning the duvet seems to have washed some of this out, or at least reduced the odor.  I can’t get it to a washing machine at this point in time, unfortunately.

After 30 mins:  Vomit, faint booze, skunk, trashcan. Now that this has dried down it’s gone stable except maybe getting even more sweet-cereal-vomit and more metallic.
Official Notes: The same luxuriant notes from the toast... with some extra bourbon, Froot Loops, Cap’n Crunch, Rice Krispies, and a searing headache.
Yup. Dead on. I maybe got a little less of the Rice Krispies. The ‘searing headache’ accord must be the vomit-in-a-metal-trashcan.
There’s more nuance in there: whispers of floor cleaner and I’m now getting just a touch of the jasmine again. But this is honestly so hard to smell - painful, and nausea and headache inducing - that taking a deep whiff to analyze it is something I’m not really hot on doing.

Final Opinion: This was possibly the most insidious perfume I’ve encountered so far. It starts out so mild. I even was all like ‘Oh, I could see this being wearable for someone who deeply loves sugary cereal’.
Also, since it initially seemed so benign I was not careful with it and will now have to wash a duvet.
Props to Jenn for this level of nasal trickery. You got me. 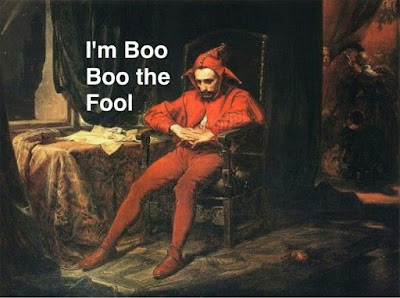 You can find Jenn and her creations (all of these done for the forces of good) at libertinebathhaus.com