For those joining us anew, please allow me to reiterate the tale of the Gentlefolk’s Challenge issued by Andrea of Sucreabeille and her five fine companions. I was guided by means most extraordinary to Sucreabeille’s private island perfume laboratory. Once on the premises I was challenged by five perfume houses to smell five foul perfumes to earn the right to sample five divine perfumes.

After the challenge was issued I, of course, accepted. I could hardly say no to such a fantastical call to adventure! The five perfume house owners smiled wickedly then dispersed throughout the laboratory’s many rooms. Apparently each scent pair needed to be sampled in isolation. I was provided with a map that would guide me through my journey…

… The room which contained the first challenge was not, per se, a room. It was a balcony garden that protruded from a cliffside. Below the waves of the Pacific crashed into the island’s mighty rocks. ( Quite curious that we were so high up - given that until the exact moment of emerging onto this balcony all of the laboratory’s facilities appeared to be located deep underground).

Leaning against the railing of the balcony, wearing a tuxedo, was Toni of Deconstructing Eden. She gazed pensively at the horizon.

“You know, it’s quite impossible but I like to imagine I can see it from here,” she said.
“See what?” I inquired.

I remained silent. Other than my trip to this island I’d never before ventured to the North American west coast.

“Los Angeles is a harsh mistress. During the day she’s a glowing city of light and laughter but at night…” Here Toni smiled mirthlessly.

“I present to you my perfume pair, “ she said “ The first is City of Night - I’m actually kind of proud of it. It took a lot of work to accurately capture the exact character of what an L.A. back alley dumpster smells like. Don’t put it directly on your skin - it’s unlikely to easily wash off.
The second scent is La La Land. It’s designed to capture the portion of the character of the city that’s easy to love.”

Below, dear reader, are my notes on the pair of scents… 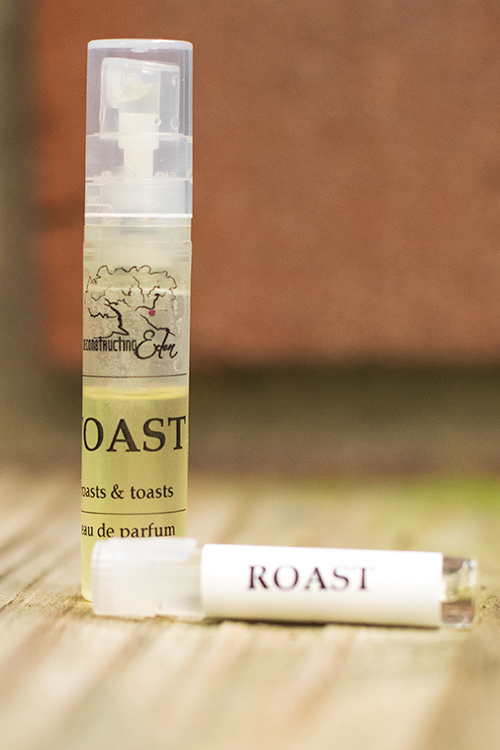 In the bottle: Deconstructing Eden’s Spray EDP samples are locked safely away in a sample bottle I can’t figure out how to get open! Thankfully Toni was kind enough to also provide me with a wand sample of the scent. While every part of this review after this section will be done with the spray EDP by necessity this section will be sniffing the lil wand bottle I have of this.
Bright, fizzing wine. I recall this having a champagne note and this is the most realistic champagne note I think I’ve ever smelled. Tiny bit of citrus followed by an even smaller bit of ultra mellow green. Base of the scent is a golden resin with some creaminess. I think I also recall this having cashmere and tonka? I don’t get any strongly ‘tonka’ vibes from this but I could see it adding to the creaminess of that resin.

Wet on my skin: Bright, ultra realistic champagne and wow, there’s that tonka. The champagne is ultra sweet and smooth. Tiny edge of citrus - not getting as much of that mellow green. Still has that golden resin base. Golden, sweet, bubbly, and a little acidic.

Drydown/After 30 mins: Since this is an EDP and they dry so fast I’m combining these two sections.
Anyway, once this dries down the deeper, muskier odors (i.e. the soft musk of the cashmere) in the scent come forward. The champagne is still there but not as dominant. Sweetness from within the scent has come forward that is the tiniest bit powder,y in a candy way - but that’s often how cashmere notes go. It gives the scent a tiny bit of a candied vibe (though none of the fruit notes in it smell unrealistic). The tonka and cashmere make up the bulk of the scent… and I think there might be sandalwood in here too? If I’m recalling the notes correctly? The golden resin makes up the base of the scent.
Wears stable and strong and a little closer to the skin than I’m used to with EDPs. I still got occasional whiffs of it at arm's length while it was on, but the strong scent cloud started a couple of inches from my hand.

Official Notes: Orange flowers and raspberries floating in champagne, on a table of sandalwood, bamboo, and amber, wrapped in tonka bean and cashmere with a squeeze of citron peel.
So I remembered a lot of these notes! But not the raspberries or orange flowers lol. The raspberries are adding some of that ‘sweetness’ that gives the ultra realistic champagne an almost muscadine quality. The orange flowers are probably contributing to that sweetness and the citrus smell too, and with the words in front of me I can get that tiny hint of floral at the edges. The bulk of the citrus edge is coming from the citron peel though.
The bamboo is that ultra mellow green - and it mostly rounds out that character of the scent without standing out from the blend. The standouts in here are the tonka and cashmere - which give the scent a soft muskiness at its core. The amber and the sandalwood give the scent a firm, golden-resin base.

Final Opinion: I remembered a lot of notes from this! This scent was particularly exciting to me out of the Roasts and Toasts batch because I love golden scents and this is (indeed) very golden and I (indeed) enjoyed it thoroughly. I’d characterize it as a soft-musky fruity-boozy resin scent with tiny citrus and floral nuances. Really exciting and unique! I’d say this scent would be a standout for fans of bright, laughing scents like Deep Midnight’s Light Court, Sucreabeille’s Serpent’s Brew, or Sugar Milk’s Amethyst soap. A perfect scent for a late summer evening.
I’ve never been to L.A., so I don’t know how well this scent reflects the ‘positive’ qualities of the city… but I can say that this scent intrigues me about what the best of L.A. is like.

I was warned not to put this directly on my skin - so instead what I’m doing for this review is taking a cotton ball, rubbing it on my face and arms so that it (hopefully) resembles my skin chemistry and using that.

In the bottle: The first wave of scent is a glassy, cloying sweetness that - well, look, it isn’t a great smell but it also isn’t awful. Right on the tail end of that is something ultra, ultra earthy. At first it reminds me of a very, very bitter patchouli but then the taste hits my mouth. You know when you bite into a burnt vegetable? It tastes like that.

And that is just the first sniff.
On the second sniff comes a wave of chemical smelling nastiness. It reminds me of nail polish remover. Below that is a smell like old urine. All animalistic ammonia. Just from opening the bottle a tiny bit has gotten on my thumb and forefinger and it smells like I’ve plunged my whole hand into a compost heap.

Drydown: There is about 0.5 seconds when I first smell this where it doesn’t smell bad. Just kind of like a sweet flower. And then, laughing like Jabba the Hutt the rest of the scent rolls in.
This is probably what Jabba the Hutt actually smells like.
So you get cloying sweetness followed by the smell of old wine beginning to go to vinegar rapidly chased by rotting trash-can smell. Right after that the taste of burnt vegetables drizzled with acetone hits your tongue. It’s all wreathed in animalistic buttstink and that touch of old urine.
It’s literally nauseating. And, of course, it has the throw - which smells like old, wilted flowers and animal butt and can be smelled from two feet away.

After 30 mins: The sweet, cloying smell has gotten more sweet, more cloying, and more urine like. The earthy, burning tasting scent is dying back some but there’s still a strong streak of animal buttstink (hurr hurr hurr). I smells like a portapotty that got a raccoon trapped in it with a couple of old bottles of white wine that’s gone off.

Official Notes: Burning magazine pages, asphalt, urine, and feces under a crystal night sky.
Well, I can see the burning magazine pages as the ‘burnt to a crisp vegetables coated with acetone’, the asphalt is probably that really earthy note in there - it kind of reminds me of a well used ash tray, now that I think about it. The urine is definitely there for a subtle portapotty vibe and the feces must be the animal buttstink. The crystal night sky must be what, when assaulted by the other ingredients in this hellscent, smells like old white wine and wilting flowers.

Final Opinion: Do not ever, EVER get on the bad side of Toni from Deconstructing Eden. This is what she cooks up for a ‘friendly challenge’ folks. This is a scent she sent to someone she likes. Her genius for perfume concoction is one that can be used for good or for evil and I fear that I’ve encountered just the beginning of what’s she’s capable of when she puts her mind to it.

You can find Toni and her creations (all of these done for the forces of good) at deconstructingeden.net

You can find single samples and full sizes of La La Land [ at this link here ]
Posted by Aubin "Clawsight" Richards at 11:27 AM