Roasts and Toasts Day 3: B. Perry Studios presents A Snoball's Chance (In Hell) vs. The Devil's Lettuce

Having learned my lesson from the second encounter in my gentlefolk’s challenge I embarked upon the third leg in this journey. The travel between rooms this time at first looked more uneventful: I stepped into a hallway that seemed quite ordinary apart from the fact that it curved just enough that I couldn’t make out the end. After five minutes of attempting to reach the end of this hallway, it became apparent that I was walking in what logic told me had to be a spiral.

The map was not helpful. I appeared to be walking in a section of it where someone had spilled their morning coffee. In the margins they’d written a helpful ‘go straight!’ with a small arrow pointing at the coffee stain.

I went on for some time. The hallway sometimes had an upward incline, sometimes a downward incline. It was featureless except for its lime green shag carpeting and seemingly infinite stream of framed photographs on the walls.

The photographs were in black and white and featured what appeared to be completely unique cats. Each cat sat looking quite solemn and wearing a cat-sized bow tie. Below each photograph was a small placard reading: “Exitus Acta Probat”.

The door came upon me so abruptly I walked into it. I carefully opened it. On the other side was a long dining room brightly lit by high, narrow windows.  Dominating the room was an equally long and narrow table laid out with a white dining cloth. Atop the table were chocolate cakes of every size and shape. In between them, artfully arranged, were decorative bits of greenery heavily featuring a familiar five-leafed plant.

Arranging some of these plants was Brooke of B. Perry Studios wearing a long red satin ballgown with matching elbow length gloves. She looked up as I walked in, smiled, and waved.

‘“Ah! My turn!” she exclaimed and hurried to a sideboard to fetch her two vials.

“I  know this ah, was supposed to be a challenge to disgust you. But I figured at the halfway point you might like something of a break” she said.

“The reality is I wanted to do a ‘baked’ scent for you. The most delicious chocolate cake for your toast and for your roast,” here she conspiratorially leaned forward, “ that same cake but laced with the scent of you know… Mary Jane. Wacky Tabacky. Sticky Icky. … The Devil’s Lettuce.”

“My ‘lettuce’ note has aged so wonderfully though! As I blended the scent just intrigued me more and before you know it, it was time for the Sucreabeille zeppelin to pick me up… You know how it is.”

“Well, I mean, I took an airplane,” I volunteered.

“Oh, yes, of course. The Pilot can be kind of jumpy around new people and you don’t want your zeppelin pilot to be jumpy,” she said thoughtfully, “In between runs they do get a tune-up in the clockwork workshop if you wanted to introduce yourself.”

“Anyway! Your scents!” she exclaimed, handing me the delicate silver tray upon which the two vials rested.

Below, constant reader, is my notes on the scents... 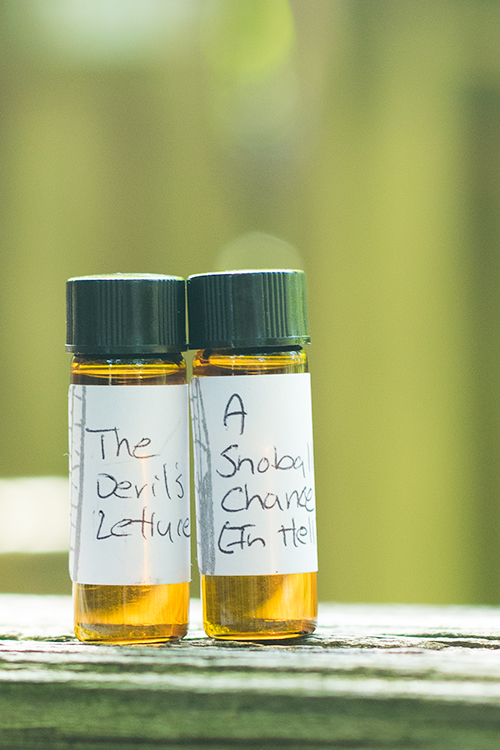 A Snoball's Chance (In Hell)

In the bottle: Very, very mild - basically a little chocolate and a whiff of coconut. I know from trying this before that on skin it completely changes however.

Wet on my skin: Two words: Brownie. Batter. Brownie batter, coconut, and buttercream icing. Many batter/cake/dough accords don’t capture what makes baked good smell so appealing - sometimes they end up smelling more like a heliotrope centered scent than a gourmand… but this one gets it y’all. The chocolate is rich and a little smokey - slashed through with buttery, sugary notes. This is, to my nose, literally like picking up a bowl of brownie batter and sniffing it wreathed in almost floral coconut. There’s something kind of light in here that reminds me slightly of mint minus the sharpness - it’s hard to place. Like a bit of something herbal or floral off to the side from your luscious coconut and b r o w n i e batter. This one also, at least wet, has great throw… and if anything smells better in the throw than it does up close.

Drydown: A lot like it was wet. Still full of luscious, almost toasted chocolate and that complex quasi-floral coconut. That smell that kinda-reminds-me-of-mint (but it’s definitely not mint) is stronger and more smells that remind me of buttercream are coming forward. It smells now like that brownie batter’s been baked and is getting slathered with buttercream with a kind of cool tanginess to it and you’re getting ready to coat the top in coconut.

After 30 mins: Essentially identical to the dry down. Very, very stable scent.  Fairly good throw throughout too. The scent cloud starts a good 6-8 inches from where I applied it and I’ve been catching whiffs of it throughout.

Official Notes: Devil’s food cake piped with cream cheese icing, wrapped in homemade raspberry marshmallow then tossed in coconut
RASPBERRY that cool, tangy scent that kind of reminded me of mint is raspberry. I can totally see it now that it’s in front of me. Think of an almost herbal raspberry that’s cool and tangy and raspberry that’s the one used here. It’s not strongly fruity - just a tiny neuance to help make the scent interesting.
The devil’s food cake is the brownie batter scent. The cream cheese icing is the buttercream - which, with the words in front of me I can see. The marshmallow blends with the core of the scent, adding body and fullness to it. It reminds me a lot of a kind of tonka-creamyness. And of course, coconut is that glorious, complex almost floral coconut.

Final Opinion: I’m shocked I like a straight gourmand this much. Brooke is a mad genius. Every note here is rich, realistic, and very sweet without going into Smells Like a Donut Shop levels of sugar. The coconut and the raspberry here add a lot of complexity to the scent while the chocolate cake accord is shockingly realistic. Delicious.

In the bottle: Sweet chocolate and coconut with a bit of resinous/patchouli edge to it wreathed with a subtle whisper of smoke. I think there’s a tiny bit of green in here that’s quite honestly blending with the coconut. Very much like its companion scent but ‘edgier’. Like, ASC(IH) is this sent on the weekdays - but on the weekends it likes to kick back a bit, you know?

Wet on my skin: Oh wow, definitely more of that patchouli smell and more smoke - the smoke smells almost like incense. Just a kiss of that herbal green (an ultra smooth, non-skunky marijuana) melding with the coconut and raspberry-marshmallow. While the first scent is a very dignified, rich cake this one is absolutely several degrees more hippy. If the first scent is a decadent brownie-batter scented cake at a fancy party… this is that same cake being sold by the slice at an outdoor music festival by someone who just gave their name as ‘Moonbeam’.
It smells happy, chill, and slightly outdoorsy in a spicy-green-herbal way.

Drydown: The way this is blending the cake is a lot subtler.
So at the top I get spicy incense and spicy marijuana. Below that is COCONUT a lot of coconut. A big, sticky-sweet pile of coconut. Below that is the marshmallow with just like… a hint of raspberry I can barely make out. Then some chocolate that blends with an earthy patchouli.
While ASC(IH) is a straight gourmand where you can revel in every part of the gourmand this is a resinous-herbal scent with gourmand nuances. Which, nothing wrong with that. I’m just surprised by how differently the two scents wear: For example the marshmallow sweetness in this, when it blends with the marijuana, almost reminds me of maple syrup!

After 30 mins: Stable to the drydown. Maybe able to pick out a tiny bit more fruitiness from the raspberry.

Official Notes: A Snoball's Chance In Hell, reeking of patchouli oil, burning incense, and marijuana smoke
Yup. That about covers it. I wouldn’t say it’s reeking - but those are prominent notes in there!  It is pretty much what it says on the tin - though I would say that the way the patchouli and marijuana blend with the other scents in the perfume changes its character pretty distinctly. This is resinous, spicy, and slightly outdoorsy with a sweet-gourmand undercurrent.
Wears strong with very, very solid throw.

Final Opinion: Of the two I do personally prefer the toast - but if you’re a big fan of resinous gourmands give this one a spin for sure! Brooke’s notes are super high quality and fabulously aged - it makes her perfumes rich and smooth

---
You can find Brooke and her creations (all done for the forces of good*) here at B. Perry Studios https://www.etsy.com/shop/bperrystudios

*Except, technically, for The Devil's Lettuce
Posted by Aubin "Clawsight" Richards at 12:12 PM