Roasts and Toasts Day 4: Sucreabeille presents Cup of Ambition vs Cup of Desperation

After the breather provided by the third leg of my strange journey I was refreshed and, hopefully, ready for whatever challenge awaited me next.

The next portion of the journey, in terms of travel, was positively mundane. I merely had to wander through a series of back rooms that must comprise the warehouse of this lab. Mind you, their relative sizes and positionings were, of course, seemingly making use of non-Euclidean geometry to achieve the pathway they formed. But other than that… they were warehouses of all the sundry items needed to manufacture perfume and bath products.

Then I opened a door and was in… a diner. It looked timeless in construction - it could have been built any time between the 1940s and the present.  Two of the walls were lined with huge windows that gazed out into a dark countryside that was featureless apart from a straight stretch of highway, dim fields, power lines, and a sky alive with stars.

Behind the counter of this diner was Andrea of Sucreabeille. She wore a simple blue sleeveless dress that made one think it would be accompanied by pearls (she wore, however, no pearls). She smiled at me and bade me to sit down. I obliged and took a seat on one of the bar stools at the counter.

“I wanted to thank you for doing this,” she said.

“Don’t mention it,” I replied with a smile, “ It’s been all the adventure promised and more .”

“It’s been an adventure for us too, believe it or not,” she said, “I’m so pleased with the audacious bravery of everyone involved. Bad reviews are scary for us, you know? To us, you’re the lion we’re taming.”

I guffawed but she merely nodded.

“No! Really. For us this hasn’t just been about a bit of perfumer’s revenge (though I won’t lie - getting to be a bit evil is good for the constitution). It’s been about turning a weakness into a strength - after all, after you’ve gotten the worst review of your life all the others are going to seem pretty mild won’t they?”

I contemplated what she said. Yes, there was adventure in it for all parties involved. Both because, really, we were all here on this island that I was beginning to suspect had a high chance of turning out to be a Lovecraftian horror and because we were facing down the most terrifying beast of all: potentially awkward social interactions and hurt feelings.

At this point she reached beneath the counter and produced two vials of perfume…
Below, reader, are my notes on these two scents: 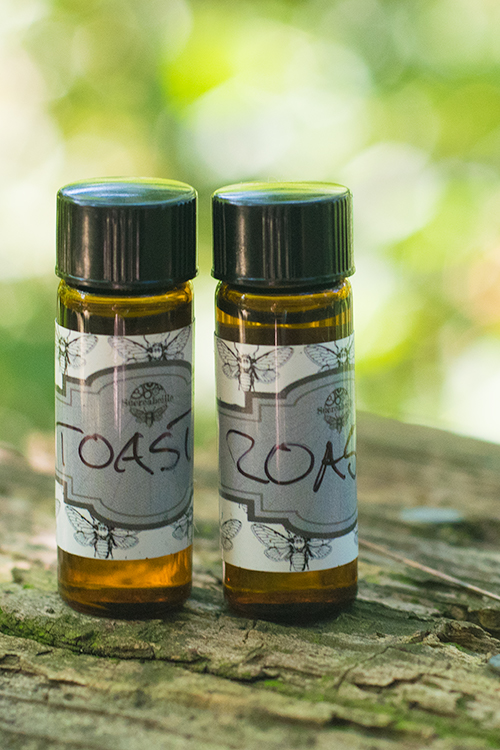 In the bottle: I recall this has three coffees in it. With this knowledge I can kinda pick them out. One is a black, bitter, diner coffee. The kind of serious, no-nonsense coffee that you reach for at 6 A.M. (and then reach for the generous cream and sugar because that stuff packs a wallop). The second coffee is a chocolate-y mocha - rich and a little soft. One you order on cold days. The third coffee is one with a glassy edge and a kick to it that reminds me a little of the smell of gasoline - a sharp espresso. At the edges of the scent you get a sweet, creamy vanilla-like flavor. I think this is supposed to have toasted marshmallow in it? In the bottle it’s all vanilla-y.

Wet on my skin: That sharp coffee comes to the forefront and the creamy smell intensifies. This really does smell like coffee with cream and sugar in it. That sharp edge is there to wake you up - it’s like a cross between coffee, smoke, and gasoline. Under the sharp coffee is that smooth mocha and at the base is the ultra dark coffee.
I don’t get much in the way of marshmallow that smells like… marshmallows. However, I’m sure the marshmallow note is where that creamy sweetness is coming from.

Drydown: As this dries down this scent moves from sharp to much more blended and mellow. The three coffees harmonize and the overall scent effect is that of a comforting diner. A ‘Tom’s Diner’ diner. There still is a little bit of a smokey sharp edge from that one coffee, but, it’s much reduced from where it was wet - just enough there to keep stuff interesting. I’d say of the three coffees the mocha dominates at this point.
That creamy, soft scent remains. You know what? It reminds me of tonka. It’s like a combination of a tonka and a marshmallow.

After 30 mins: About like it was during the drydown - the smell that reminds me of tonka is coming through more strongly but otherwise about the same.

Official Notes: Toasted marshmallow, three kinds of coffee, dark chocolate
I recalled most of these notes - but not the dark chocolate! I read it mostly as a mocha. Could this have… both mocha and dark chocolate? Is the dark chocolate adding that creamy sweetness that smells like tonka to me? Who knows!
Mostly this scent is what is says on the tin - but with a little bit of unexpected smokiness/sharpness at the edges making it interesting. The marshmallow is a little less prominent than expected, and the chocolate blends with the coffee. This pretty much smells like a gloriously complexly-coffee-smelling coffee (reminds me of Starbucks) with a good dose of cream and sugar.

Final Opinion: Coffee lovers looking for a pure coffee experience with a bit of sweetness and an interesting edge… rejoice! This one is totally worth trying. Personally? I found this scent to be really comforting and reminiscent of safe, quiet coffee-smelling places... while at the same time maintaining a bit of an edge and complexity.

In the bottle: This smells… strangely wearable?
Don’t get me wrong. It’s not “normal” perfume. There’s a rolling cloud of whiskey, chocolate, and dark, dark coffee that comes out of this. There’s edges of gasoline. It’s much deeper than its companion scent.
It quite honestly smells like a truck stop you’ve pulled into at 4 A. M. because you must, must have coffee. Why does that truck stop smell like whiskey? Is that a question you want an answer to?
But in that same way this scent is so familiar it loops back around into the realm of ‘oddly comforting’. Like yes, it’s 4 A. M. middle-of-no-where gas station coffee… but who has not had that cup of coffee? For whom has that cup of coffee not been the best cup of coffee in the whole world when you get it?

Wet on my skin: Oh, that gasoline is coming through more - but this whole thing is blending really well in a curious way.  The atmospheric gasoline smooths and mellows the kind of espresso ‘bite’ of one of the coffees. The whiskey makes the chocolate in the mocha-coffee really glow with the whiskey itself playing a mildly boozy second fiddle to that gasoline.
What’s really odd is the toasted marshmallow is really coming out in this. It’s creamy, it’s luscious. It smells like coffee that’s been drenched in as much hazelnut creamer as you can fit in the cup.
Maybe this Cup of Desperation smells less like a 4 A. M. truck stop, and more like you at 4:45 A.M. finally, red eyed, pulling into your destination surrounded by a haze of gasoline smell from your 14 hour drive and the gasoline you spilled on your shoes around an hour ago. You stagger inside and brew a cup of instant coffee, put in as much whiskey as you think you can get away with, and then top it off with hazelnut creamer to the brim.

Drydown: It’s still hard to describe this one. Like, coffee is a food smell, right? But it’s also an atmospheric. In Cup of Ambition the coffee is firmly gourmand with a bit of comforting-diner nostalgia. In Cup of Desperation we’ve moved over to a firmly atmospheric coffee. This smells more like a place that has coffee in it - perhaps even with a cup near you - than coffee itself, if that makes sense.
Topnotes of slightly chemical but strangely mellow gasoline and espresso. Midnotes of chocolate, mild coffee, and toasted-marshmallow-that-smelled-like-hazelnut-creamer. Base notes of whiskey and dark-as-night black coffee.
It’s Cup of Ambition but darker, edgier, and in a leather studded jacket. Cup of Ambition was sweet with an interesting edge - this is all edge with a bit of interesting sweet. It’s funny how the two scents reflect one another like that.

After 30 mins: As this wears a touch of grodiness does come out. But it’s kind of… nice grodiness?  It makes me feel like a post-apocolyptic biker chick from a Mad Max movie who’s gotta have her cuppa. I can see this not being for everyone - it’s chemical, it’s harsh, it’s bitter and kind of dirty feeling… but it’s all contrasted with that sweetness of the scent.
I think what’s adding the dirty feeling is the chocolate having its earthy qualities brought out.
Aside from that kind of maturation the scent is very stable and wears super strong with a very solid throw on it.

Official Notes: The same coffee from Cup of Ambition drenched in gasoline and whiskey.
Yup, it’s all there folks! What is says on the tin.

Final Opinion: I actually like this one better than the Toast (whoops). Uh… I guess I could roast Andrea for that? I came here for Stinks with a capital S! I expected bogs and swamps! I expected road-kill! I expected a prohibition-officer-in-the-20s-breaking-up-a-modern-frat-party levels of booze! And what did I get? An atmospheric I actually like! That will probably have a committed fan-base if it goes live!
You did a bad job at doing a bad job - which… loops around to a good job? Because I do like this? I’m confusing myself at this point.

---
You can find Andrea and her creations (all done for the forces of good) here at Sucreabeille. [ link! ]

You can find a sample pack containing samples of all five of the "Toast" scents in the Sucreabeille Indie Marketplace at this [ link right here ].

You can find single sample sizes and full sizes of Cup of Ambition here [ at this link ].
Posted by Aubin "Clawsight" Richards at 1:44 PM