With Andrea’s words in mind I set out on the fifth, and final leg of my journey. I exited the diner through a back door and began an upward ascent. This seemed to be a “straight” shot to the surface. However, it involved no less than three climbing walls, two escalators, and a paternoster. Once on the surface of the island I was greeted by a small collection of charming cottages - the laboratory’s guest quarters.

I wound my way through the cottages. Each one had a garden overflowing a fresh flowers out of a perfumer’s dream: lilac, lavender, roses of all kinds, tulips, heliotrope, delicate narcissus, orchids, blooming cherry, peach, apple, orange and magnolia trees. These are merely the ones I could name at a glance. The flowers seemed to be thriving irrespective of season, temperature zone, or time of day.

One cottage, set slightly back into the pacific northwest forest, was my destination. The flower beds on this one were slightly abated to make room for great, bubbling cauldrons of shimmering wax. I knocked on the door of the cottage and it opened on silent hinges.

Inside, lounging on a plush couch before a roaring hearth was Chris of Sihaya and Company bedecked in a diaphanous nightgown. In her hand was a tall flute of champagne. She tilted the champagne at me in acknowledgement.

“Welcome to your final Roast and Toast!” she said, “I imagine it’s been quite the journey to get here”.

“Just in this last leg there were two climbing walls! You don’t think you’re out of shape until you hit that second climbing wall,” I said and flopped into an overstuffed chair.

“ Oh, if you turn your map over it’s got the direct routes. We thought you were taking the scenic ones on purpose.”

I stared at her for a long moment then very slowly took out my map, unfolded it, and turned it over. There was indeed, a set of very direct routes that I had completely failed to notice somehow. I groaned and smacked my forehead.

“Well! You’re here now. And being tired is actually for the better,” she said, “ You see my two scents are based on A Good Day with the Baby vs A Bad Day with the Baby.  While the roast is, er, everything you’d expect the toast is the most relaxing set of scents I could get my hands on. … They’re candles though, so make sure you light the roast scent, er, outdoors.”

She tilted her champagne glass at a small tray with two large candles on it sitting on a table between us. I took the candles, a book of matches and proceeded to conduct my final two reviews.

My notes on these are below… 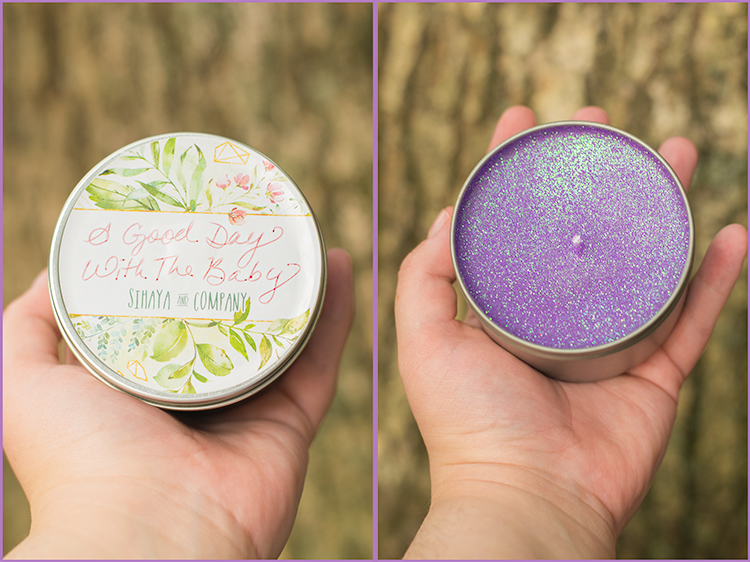 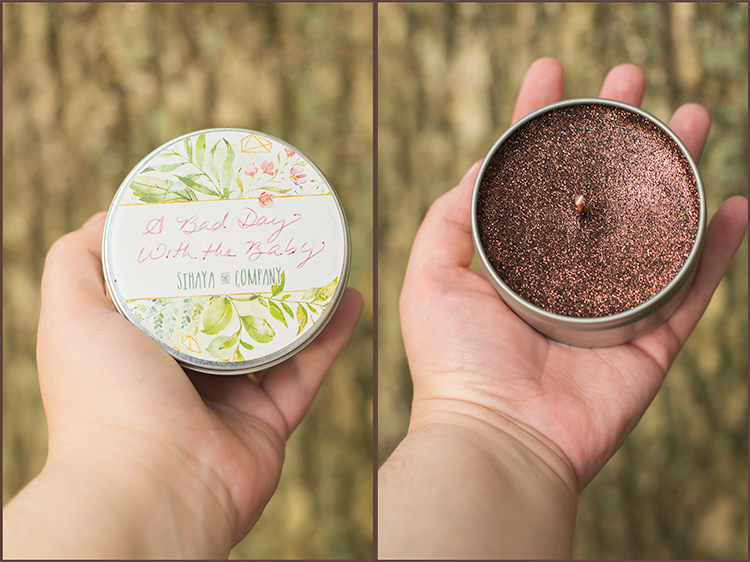 This is my first time reviewing candles - so, forgive me if my method here is not as refined as it is for perfume oils! For both candles I reviewed them outdoors - so odors might not be as pronounced as they would be in a house.

A Good Day With the Baby

Unlit: Toasty, nutty-sweet note (I think I remember it being marshmallow?)  and skin musk wreathed in florals with a touch of powder at the edges. Deeply comforting. Like a cuddle in candle form. I think I recall the floral in here being lavender - but it’s an ultra sweet, ultra soft lavender. Like on the lavender spectrum you have ‘medicinal’ on one end and this one on the other end. I feel like I’m getting a tiny kiss of citrus in here at the edges.

Freshly lit: One thing about reviewing a candle that I hadn’t considered was that along with the odor of the wax itself there’s notes of the wick, a tiny bit of smoke, the warm wax and of course the flame. I feel very silly for not realizing this sooner and I’m sitting here like ‘oh my god this opens up a whole new world of fragrance possibilities’.
Anyway, freshly lit (about 2-5 minutes of burning, enough to get the wax melting) I’m getting clouds of warm, nutty toasted marshmallow, skin musk, and citrus. The floral is a pale whisper at the edges offering a hint of relaxing sleepy-time mellowness. Occasionally there will be a swirl of milky, vanilla tinged powder.  You know how boyfriend candles are a thing? This is a cuddle candle that you put on during your most intensely needed self-care bath.
The flame on the candle burns very well and doesn’t sputter. There is a small amount of smoke released from it - but nothing extraordinary.

After 20 Minutes: One thing I wasn’t expecting that happened is how much of a hypnotic experience it is to light a glittery candle on the back porch shortly after sundown. The flame flickers, the glitter shimmers, my eyes unfocus and time just kinda happens without me noticing it. I’m sure the relaxing, snuggly smell is facilitating it too.
Speaking of the smell - since I’m outdoors it hasn’t formed a thick cloud, but there definitely is a detectable cloud around me. It’s very similar to how the candly smelled freshly lit - toasty marshmallows, skin musk, vanilla with edges of powder, citrus, and probably-lavender-floral. Deep in the scent there’s something a tiny, tiny bit minty.

Official Notes: Toasted vanilla puff treats, lavender shampoo, baby powder scented lotion, and marshmallow-sweet baby giggles.
So, the toasted vanilla is the vanilla note, the lavender is the floral, the shampoo must be giving me that citrus vibe, the baby powder is the powder. The scented lotion is probably what’s reminding me of skin musk and is a eensy bit minty - it’s a gentle, creamy, soft note. The marshmallow-sweet baby giggles must be the toasted marshmallow note.

Final Opinion: Uhg, I love this. This is an easy to love smell that would cruise right into a Lush or Bath and Body Works catalog ( albeit as one of the more unique, creative smells in said catalog). I can see this being a great candle to pick up for Self Care Night or to give as a gift at a baby shower… or to any friend who’s kiddo is getting older that find themselves missing that “new baby smell” everyone raves about.

A Bad Day With the Baby

I recall this one has old coffee and uh… that other smell babies are famous for.

Unlit: So when I first got this I was like ‘That’s not that bad’ when I smelled it. It was mostly old coffee and something that reminded me of black musk. But apparently the air in this candle tin just needed a few days to… marinate. Because this is nasty. This is ‘cruise ship diarrhea’ nasty. The coffee barely factors in except to enhance the general muck. There’s an edge of like… saltiness or something too. Like sweat. Or tears.

Freshly Lit: As I watch the flickering flame play in the reflection of the maroon glitter I find myself wondering how something that looks so beautiful can smell so bad. This is like some perverse reverse Beauty and the Beast. Thankfully the first whiffs I’m getting at the old coffee. Which after that cloud of ‘someone dropped firecrackers in an outhouse’ is a relief. Maybe my nose is shutting down in self defense and I’m only getting the coffee. Maybe it’s Stockholm syndrome. ‘It’s just a bitter, dark coffee… maybe I kind of like this…” I mutter.
I can’t decide which would cause me to suffer more - the scent actually not stinking that much and having to spin comedy gold from it’s-basically-coffee straw, or it holding true to its nature.

After 5 minutes: About three minutes into the test one mosquito decides it is brave enough to enter the candle’s cloud. It flies around me aimlessly, unable to decide where I begin and the stench ends. I begin to question the wisdom of lighting a feces scented candle after dark. We’ve got coyotes and foxes and bears around here. Maybe they’ll think it’s an enemy, challenging their territory.
Alternatively it might scare away the groundhog that lives under our deck and drives our dogs to distraction. I find myself brightening at this idea.
The stink intensifies.

After 10 minutes: This candle and I are definitely in some sort of messed up relationship. ‘This isn’t nasty enough’ I think, ‘perhaps the glitter suspended in the wax is lessenting the surface area’. I swirl the candle around to spread the melted wax over the unmelted portion. There’s now a bigger pool for the melted wax to evaporate from.
The breeze switches direction so I’m downwind of the candle. A wave of ‘well used baby diaper’ assaults my senses. ‘Ah,’ I think ‘that’s more like it’.
This is the brown, glistening well where humor comes from.

After 20 minutes: It’s getting to be more… garbage can than baby diaper at this point. It reminds me a lot of the stink that comes from our large, outdoor garbage can that our city collects from weekly. In that garbage can you get a mingling of all the general rot that is removed from a household with the bags of dog feces my husband deposits in there after his walks.
The longer this candle is lit the worse it smells. It keeps teetering between a good amount of earthiness and that kind of ‘living thing’ indole (enough to be interesting - like ultra dark coffee or chocolate) and just… raw unfettered garbage can full of poo with a hint of old socks and vomit.
It’s a fascinating study in the volatility of aromachemicals. It just takes one downwind whiff to go from ‘Hm, what an interesting coffee scent’ to smelling like something a bobcat might spray on a tree to let other bobcats know it is nastiest bobcat in the woods.

Official Notes: The fungal remnants of the bottle you forgot in the bottom of the travel bag, spit-up on your shirt, several stinky diaper blowout and a screaming child that warrants about a gallon of coffee - once freshly roasted, now cold and stale.
I definitely can see the decaying food with a hint of sour milk, and the spit-up is probably giving it that certain… light-vomit quality. The diaper blowouts are obviously where that ‘I’m definitely sick with something’ poo smell is coming from. And that old, oversteeped coffee is definitely that very-black coffee note.

Final Opinion: Even now there are new odors coming from this candle. I just got one that smells very definitely more fungal! Charming! I think this is a… one of a kind candle that will soon be adding to the aforementioned bouquet of an outdoor trashcan where it’ll probably function as raccoon repellent.

You can find Chris and her creations (all of these done for the forces of good) at sihayaandcompany.com .

You can find a sample pack containing samples of all five of the "Toast" scents in the Sucreabeille Indie Marketplace at this [ link right here ] .

You can find single samples full sizes of A Good Day with the Baby [ at this link here ] .

For any wondering how my journey concluded: After finishing taking my notes upon the final review I emerged from the cabin to find all five of my hostesses gleefully awaiting me. I shook hands with each: I was inundated with apologies for the roasts - to which I waved a hand and assured them that the experience of the toasts was more than enough to offset whatever stinks the roasts delivered.

Andrea informed me that my boat was ready to return me to the mainland. I said my goodbyes which concluded in a group hug amongst the flowers. I was then blindfolded again and escorted to the beach where I arrived. There my blindfold came off. Andrea gave me one final hug and thanked me for taking part in this experiment. I thanked her for her generosity and tour of the facilities. I then boarded the small boat captained by the woman with a cascade of silver hair and set sail for the mainland and my next adventure...