A Winter's Ball Day 2: Two Dances with Darcy from Poesie

And we're on to day number two of A Winter's Ball. Enter our leading Gentleman, Mr. Fitzwilliam Darcy. And before we go any further let's address the elephant in the room: Fitzwilliam. It's like... also the name of his cousin? And what does Elizabeth call him when they're alone? Or does everyone just pretend his first name doesn't exist?

So today's scent is Two Dances with Darcy by Poesie. It aims big: to capture the sexual tension, frustration (you can tell they both really, really want to have that argument), longing, infatuation and puns all in one perfume.

This perfume got several days of rest - somewhere between three days and a week. Poesie's 5ML packaging looks nice - professional. The 5ml metal rollerball has had no leaks even when stored in weird positions but does dispense oil generously when used on skin. 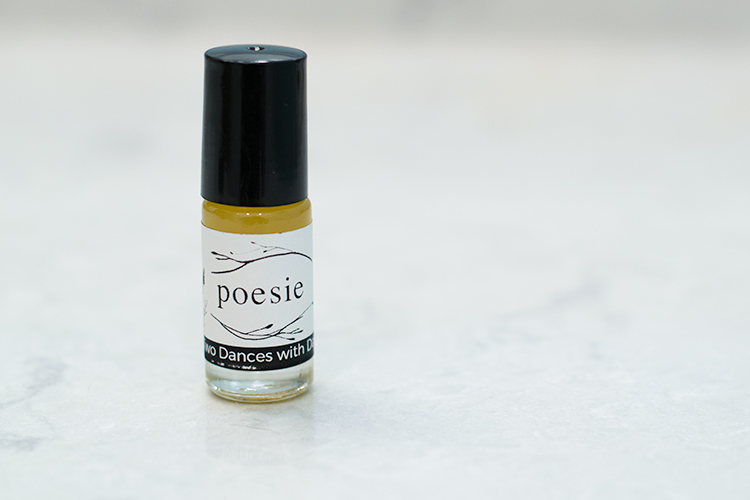 Two Dances with Darcy by Poesie

In the bottle:  Earthy-spicy topnotes layered over sweet darkness. At the top - I’m not sure how to describe the notes as anything other than ‘masculine’, ‘spicy’ and ‘earthy-dark’. Under that is a bit of dark, musky sweetness - maybe myrrh? Or myrrh with black musk?  And at the edges of that? Leather and resin.  Dark, creamy, sweet and (dare I say it) kinda sexy.

Wet on my skin: Still spicy at the top but now I’m getting some citrus in there. It’s quite sweet - orange blossoms maybe? Beneath the bright citrus is the bottle scent - all musky-resinous, dark and rich. Very smooth.

It kind of reminds me of how a hot, dark, slightly musky dude drinking Grand Marnier would smell like.  Rich and dark but that citrus also takes it a bit Christmassy.

Drydown: All right. Let’s figure this out. I’m gonna take a stab at notes - which will probably be wrong but...

At the top spiced orange liqueur and vanilla. Beneath that I’m getting myrrh, patchouli, and black musk with an edge of leather.  The smell is very stable to how it went on wet - still rich, masculine, dark and smooth with bright orange notes at the top taking it into Christmas territory.

After 30 mins: Still wearing quite strong and stable! A bunch of the orange has died back at this point (though it’s still there) but the rest of the scent is stable to how it went on.

Official Notes: A splash of her lavender water, a hint of his Regency cologne and pipe tobacco, the polished dance floor, flushed skin, and is that...the perfect pear?

As predicted, my note guesses are entirely off.

So, the lavender water I can totally see with it mentioned in front of me. It’s the ‘spice’ in there. A very balanced sweet-and-herbal lavender. The pear is what I was reading as citrus. The Regency cologne must be what smells dark, musky, and masculine (still gonna guess myrrh and black musk being involved here at some point). The ‘smooth/alcoholic/resin’ smell must be the ‘polished dance floor’. The pipe tobacco is what I was reading as patchouli - which, like… I can totally see now.  The flushed skin must be adding some of those musky qualities.

Verdict: I like a scent with pipe tobacco??? What??? If I’d gotten this in a sample size it might not have been an upsize for me, though it would have been a keeper (mostly it’s masculine-fancy enough that I couldn’t see myself wearing it regularly enough to justify the purchase). But I’ll be keeping my 5ml to whip out when I wanna smell like I’m here to break hearts and brood.

You can get this scent as part of the A Winter's Ball set found [ here ]! The set is on the pricey side (it's a luxury box!). However! Sucreabeille is also running a sale right now (11/25/19) and this would push you up into some of the higher tiers all on its own... so you'd get a box of lovelies and a bunch of other swag along with it.

You can also buy this scent solo from Poesie [ here ] if you just want it alone!